The Science of Relations ~

Some time ago, when we were reading The Real Book About Benjamin Franklin, by Samuel Epstein and Beryl Williams, I realized that there are two more roads of learning we could explore - the American Revolution or the French Revolution. Although, of course, Franklin played a pivotal role in the revolution of his own country, he also met the king and queen of France while living near Paris as an ambassador of the colonies. This king and queen were no other than Louis XVI and Marie Antoinette! Ironically, the financial help that this king granted to the American colonies in their fight for independence would someday play a major part in awakening a revolution among his own people.

Although I had "covered" the French Revolution several times during my school years (I was educated in Europe), I never went past the initial flickering flame of interest. Mainly because we were just cramming facts from a textbook.
Thus, I was delighted when I found so many great books that actually made the topic come alive!
There were fascinating books on Marie Antoinette herself; a riveting book which reflected the journal entries by her young daughter (during the time of imprisonment); books on France and Austria (Marie Antoinette's native country) and even a book depicting the perspective of a Jacobin's daughter. All very well written and interesting!
Branching out in all these directions, which are yet linked to the time of the French Revolution, and making connections, is what Charlotte Mason called the science of relations. It happens effortlessly for children.

Here is a selection of the best books on the French Revolution, written just for them~ they gently engage and enlighten and in many ways provide a safer reading environment, as they do not indulge in the cruelty of those times.


~ Marie Antoinette, by Bernardine Kielty Another great biography that is hard to put down. Grade 4+


~ Take a Trip to Austria, Keith Lye Some text and many wonderful pictures about this beautiful country.


~ This is Paris, by M. Sasek A classic which shows many landmarks.


~ The Inside-Outside Book of Paris, by Roxie Munro Colourfully highlights the culture of Paris.


~ A Visit to France, by Kirsten Hall An easier book that takes younger readers on a sweeping tour.


~ The King's Day: Louis XIV of France, by Aliki Technically, this is not about the French Revolution, as Louis XIV, France's Sun King, lived many years before, but it is a very fun, splendid book that shows how extravagant life at Versailles was!
"Louis XIV was every inch a king. He wore the curliest wigs, the richest robes, the rarest jewels, and the fanciest shoes in all of France. What might a day in the life of such a magnificent king be like?" Grades 2 - 8.


~ Life During the French Revolution, by Gail B. Stewart A nice overview. Grade 6 and up.


~ Song in the Streets, by Cornelia Spencer "A brief history of the French Revolution". Grade 7 and up.


~ Madame Royale, by Elizabeth Powers Based on the diary of Marie Antoinette's young daughter, Marie Therese Charlotte. What riveting insights! Grade 7 and up.


~ Puzzle of the Lost Dauphin, by Gwen Kimball Whatever happened to Marie Therese's little brother?
What became of young Louis-Charles will surely forever remain a mystery. Was he able to escape? A girl tries to solve the puzzle! Grade 5+


~ Why No, Lafayette? By Jean Fritz He fought in the American Revolution and was like a son to George Washington before becoming involved in the one sweeping across his own country (where he played a decisive part on the day the Bastille was stormed). A readable biography. Grade 5+


~ Jacobin's Daughter, by Joanne Williamson A tender story against the background of radicalism that enveloped the French Revolution. For grades 5 - 12. 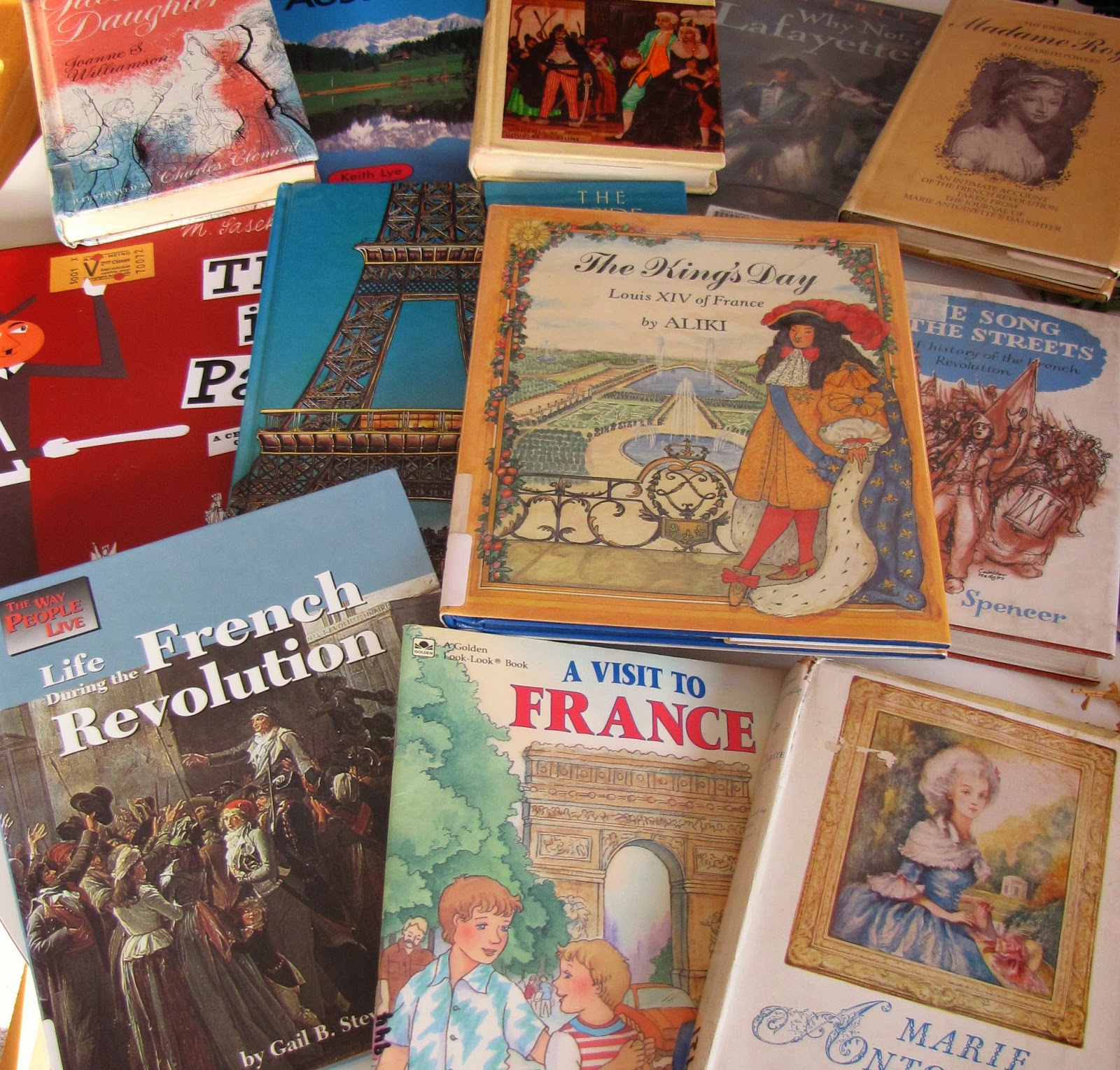