The Blooming Age of Explorations II

Christopher Columbus, by Charlotte and David Yue How exactly did Columbus do it?  How were the ships built; how did he assemble the crew and how did he use the common instruments of his time (compass, sand glass, sounding lead, astrolabe, and others)?


Navigation: A 3-Dimensional Exploration, by Anne Blanchard The history of navigation in a pop-up book!


They Put Out to Sea, by Roger Duvoisin A wonderful book about discoveries and the story of the map!


Daniel Duluth, by David Abodaher Bio of one coming from Old France to New France and joining the legendary coureurs de bois. This eventually earns him the trust of the Governor of New France: Count Frontenac.


Sense of Direction, by Vicki Cobb "Some of the methods explorers used in discovering new lands can help you find your way in case you are ever lost. You can learn how to follow directions to get to places you have never been. (...) All you need is a compass, a map, when one exists, and some information about using them that you can get from this book."


Compass, by Paula Hogan Where it was invented, how it was first used on ships to sail the seven seas and how it eventually evolved into our modern compass.


Prince Henry the Navigator, by Leonard Fisher A picture biography of the Portuguese with a great vision who lived at a  time when no one even knew about the size and shape of Africa.


Man Who Made Time Travel, by Kathryn Lasky Beautifully illustrated picture biography of the man who invented longitude.


By Star and Compass, by Jack Coggins What is dead reckoning; how do you navigate by Polaris and what is meant by shooting the sun? This is the story of navigation.


Atlas in the Round, by Keith Lye "Our Planet as You've Never Seen It Before".


Map Is a Picture, by Barbara Rinkoff Simple introduction in the Let's-Read-And-Find-Out Science Book series.


Whole World in Your Hands, by Melvin and Gilda Berger How do you read a map?


Wooden Ship, by Jan Adkins Shows how a sailing ship was being built in the 19th century.


Craft of a Sail, by Jan Adkins A primer on sailing for kids in grade 4 and up!


And finally one of the reasons why so many set out in the first place:


And Everything Nice: The Story of Sugar, Spice, and Flavoring, by Elizabeth Cooper Yes, there even is a children's book on the history and uses of spices! Did you know ... "that at one time pepper was so rare a man could buy a piece of land, a jewel, or even a wife for so many pounds of peppercorns?" 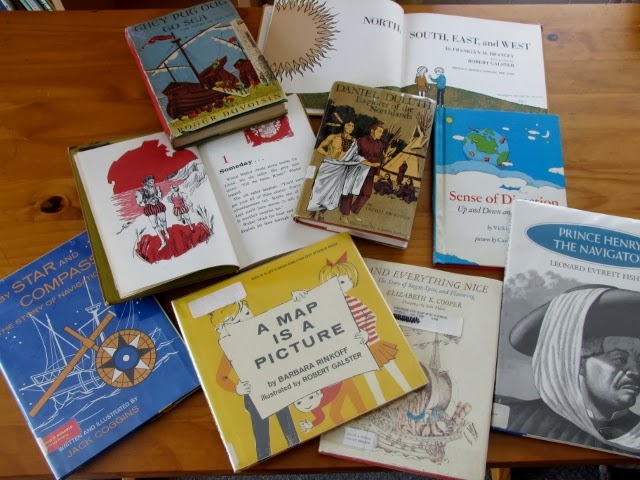