Books on spycraft, spies and their adventures seem to be quite popular with the kids in our library - and not just with our own!

Encyclopedia Brown's Book of Wacky Spies, by Donald Sobol True stories of real spies from different times and locations by the author of the popular mystery/detective series!


True Adventures of Spies, by Manuel Komroff A collection of spy stories from the international stage (such as Napoleon's Karl Schulmeister and Norway's heroes) as well as different eras (Revolutionary and Civil War, and World Wars I and II).


Knowhow Book of Spycraft, by Falcon Travis One of the first original Usborne books, filled with lots of fun activities! Find out what a real spy testified about this book (have a look at the info here)!


Mystery Candlestick, by Jean Bothwell Set during the American Revolution, eleven-year-old Pliny Barstow discovers a candlestick which contains a secret message belonging to the underground spy network - "The danger of discovery is heightened when Pliny's family is forced to quarter the horses of two British officers who have been stationed in town with the Seventeenth Light Dragoons."


Phoebe the Spy, by Judith Berry Griffin Disguised as a housekeeper in Washington's household, a young girl works as a spy and reports everything she hears and sees to her father whom she meets every day at the market. She soon is caught up in a dangerous situation that involves life or death!


Patience Wright, by Pegi Deitz Shea About the Quaker artist and Revolutionary spy who moved to England and hid her secret messages inside the hollow busts of her famous wax figures.


Secret Road, by Bruce Lancaster Wonderful, exciting story which involves Washington's secret spy ring and which will take you right to the signs along the secret road:" lighted windows, bars down in gates, overturned milk pans. (...) each intelligence agent knows only his particular part of the picture puzzle." Will you be able to read the signals?


Spies of the Revolution, by Katherine and John Bakeless Fascinating true stories about American spies during the Revolution - and their equally brave and clever British counterparts!


Nathan Hale, by Susan Poole An easier biography of the young school teacher who is still remembered for his famous last words!


Traitor in the Shipyard, by Kathleen Ernst A Caroline Mystery in the popular series. Set during the war of 1812, this mystery takes place on Lake Ontario: Are there British spies lurking around, seeking information about American warships?


Laura Secord's Brave Walk, by Connie Brummel Crook The riveting story of Laura Secord who walked for miles to alert the British of an American attack during the War of 1812, told here in an especially well-written book!


Belle Boyd: Secret Agent, by Jeannette C. Nolan One of my favourite authors wrote this "true spy thriller", a biography about Belle Boyd, the 17-year-old Southern girl who began a career as a secret agent during the American Civil War.


Thirty-Nine Steps, by John Buchan This is a classic espionage thriller set in and written during World War I by Scottish novelist John Buchan - originally pubished in 1915!


Rosenbergs, by Anita Larsen Recounts the trial of Julius and Ethel Rosenberg who were convicted as spies during the Cold War. This is an interesting read, but because of the haunting outcome of the trial I would recommend this book only for older kids. 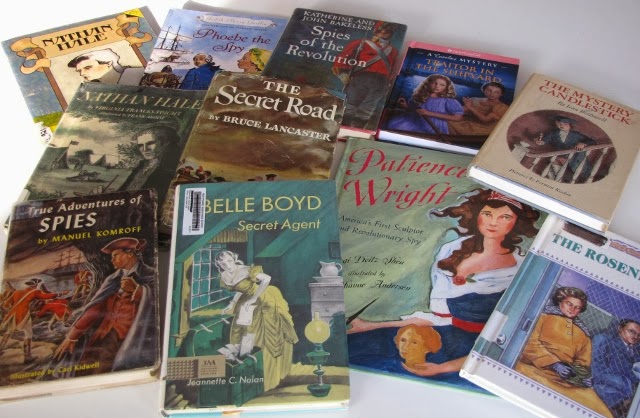